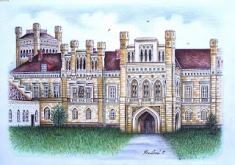 Dear friends, the General Agreement between the municipality and OZNKGA was approved on the last session of the Municipal Council in Galanta.

There were no new facts in questions to the relevant issue and therefore legitimate remarks were raised. For what was it necessary to wait another three months for approval? After all, most of the Municipal Council commissions already submitted their supportive opinions months ago. I accent that most of them. I observe that we have refused to play on words in the beginning and consented to the proposed changes without reservations. However, this was not important at all. It is to the Municipal Council members’ credit that they have unanimously supported and approved the general agreement draft with observations. Big thanks to them also this way.

I have assured the Municipal Council on behalf of our association that we will do everything transparently and in the interest of further steps for saving the Neo-gothic Castle in Galanta. The City Mayor announced that also financial support for saving the castle shall be included in the future agreement with Samsung Electronics Slovakia. We immensely appreciate this intention, which, when coming true, will be another significant step for saving the castle.

Yes, this general agreement could be signed by the City Mayor. But, with good intent, we did not want to circumvent the Municipal Council (moreover, we expected constructive observations, which we also accepted). Still it is a possession of the city and this was not disputed by anybody of us ever. Yes, after twenty years, since the castle is in the possession of the city, this is the first community initiative. Here, it should be noted that we who proposed to realize utilization of the castle courtyard and removal of all annexes to the castle, have backed the right horse. Tens of events already organized by today only affirm that. This year’s May Day picnic in the park is the brightest example. Our aim is, besides other, also the fact that everything we will do should lead to creating even better environment for our citizens and visitors of Galanta.

In the long term, the city plans to place four signs at access roads to the city that there is a neo-gothic castle in the city. Maybe we will succeed in starting the effort so that Galanta would be attractive also for tourism. And for that we all have to set to work. It will not happen itself.

We are preparing a press conference in cooperation with the city where we will explain to media our common intentions on how to complete the concept, which will then lead to specific steps for implementation, according to financial possibilities. We are not forgetting the details of occupational health and safety, but in the first place, basic permitting procedures issued by relevant state administration authorities. The process will take a long time. We are arranging necessary permissions for a collection, the status of which will be published on our page. We are establishing contacts with experts having experience in given area or being able to provide us with advice on obtaining information about various projects. We have been offered the already prepared valuable materials which will be needed when applying for funds from projects. Next year, you will have a possibility to grant your 2% from taxes to the account of our association. You can also find the overview on using funds on our site. However, in the meanwhile we can also meet in other possible ways and jointly and pleasantly spend time with seniors, with children or with specific groups of our citizens. We can imagine talks with experts from various areas of social life. Maybe it will be only some gastronomic offer, etc. in nature or in the northern wind of the castle. Also you can contribute to these ideas. We expect that you will also lend a helping hand.

After twenty years of inactivity we can see how it cannot be done. However, we want to prove how it can be done together with you. Yes, we consider various alternatives and for sure we will also meet things we are not able to predict now. It is part of our daily life and life will not stop because of this. We do not have any concealed intentions and the only thing we want from this is that we have interest for saving the symbol of the city. Not many of cities can show off with two castles with such rich traditions as we have.