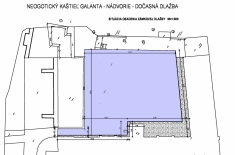 The year 2012 is coming to its end, it is time to retrospectively look back on the previous period and evaluate what went well, either more or less.

In the beginning, the project of night illumination of the neo-gothic castle was completed, even if our joy was spoiled a bit by unpleasant fact in the form of denunciation by somebody from the City Council. Unfortunately, some employees of the municipal office somehow misunderstood efforts of us- individuals. Fortunately, after expert consultations, we succeeded in putting things right.

There arose an idea of founding a civil association. After thorough reading statutes of various similar initiatives home and abroad, an organizational committee was established consisting of Peter Kolek ml., Zsolt Takáč and Jozef Keppert. The committee prepared statutes and invited people for founding OZNKGA. After the approval of statues, memorandum together with the application was submitted to the Ministry of Interior of the SR. After the approval of registration, the association was able to commence official discussions on all levels.

It was necessary to realize right in the beginning that the castle has been the possession of the city of Galanta since 1992. That means that in relation to the national cultural monument, always the owner is the partner for Regional Monuments Board in Trnava. This state authority has to approve all modifications and interventions on the building before their realization, even in the protection zone around the national cultural monument, since it is a protected park.

In discussions with the City Mayor, we have agreed on establishing a work group (City Mayor Deputy, architect of the city, person responsible for the castle and three representatives of OZNKGA). We have agreed on competencies and initiatives of all participating parties, while we put emphasis on the fact that all actions will be only within the boundaries of valid legislation. For achieving cooperation, we have prepared the draft of general agreement between the city and the civil association.

We are appreciative to the lawyer of the city who helped us a lot with the preparation of this document draft. The draft was submitted also to commissions of the City Council where it was approved or commented. Unfortunately, on the session of the City Council the word revitalisation showed to be the biggest problem; especially for people who insisted on the only one idea for whole twenty years – to sell the castle. We all know the result. Indeed 47 interested persons applied for a purchase, but nobody submitted a serious proposal and provable disposing of financial resources. It was just a display of bizarre ideas. Afterall, the City Council did not approve our proposal.

Later we came with a proposal for the entrance fee to cultural programs at Galanta markets and this arouse outrage of part of citizens, which was considerably nourished by demagogical argumentation of some city council members. Also media misunderstood the fact that also city budget has its bottom and the period of abundance is long over. After proposal of one city council member, the situation started to improve, as he proposed that entrance fee revenues will be used for restoring the castle courtyard. Today, we can confidently speak about positive experience, even there are still comments comparing incomparable things. Tradition of Galanta markets predestine this event for such dominance which other events can barely compare with.

I would like to especially appreciate the effort of the City Mayor in discussions with Samsung directing focus of the company management to the fact that the city cares for repair of the neo-gothic castle. Thanks to his initiative, the city received promise of support for these purposes. It can be said that this is for the first time in twenty years when the City Mayor has done such an important step for saving the castle. We will help him a lot in order not to disappoint the trust of the donator.

The OZNKGA is carefully prepared for this year’s Galanta markets. We have built a nice stand on the courtyard where we presented ourselves with audio-visual program, with colour multi-language brochure and we had also cups with a photo of neo-gothic castle prepared for guests. Our presentation captured interest of many visitors; it also came to useful sharing of information, praises and critique. We appreciate one as well as the other. Some observations appealed to us and we will use them in future.

In the course of time, we have succeeded in creating a separate web site. With it, the information about our activities spread out to the world and we can observe that some messages are very encouraging. We confirm that this modern form of communication will provide us with wide room for immediate information sharing. We have to be patient. We have to continually show effort and our abilities, because without that, nobody will give anything to us. Wide experiences of many engaging in similar activities also confirm this.

There was a meeting of the City Council members and members of commissions, where it should be decided what will happen with the castle, whether the castle will be sold or no. Unfortunately, the meeting ended with fiasco. It could not be named a discussion because there was shouting out, various invectives close to pub speaking and no force was able to control such demanding exchange of opinions within decency. A lot of bad things could be heard from mouths of some people, common denominator of theirs ideas was hate and envy. The result of the discussion was that the resolution of the City Council in Galanta from 2002 that the castle is being sold (already for twenty years) remains valid! For completeness, it should be added that this discussion should also decide on possible business activities within premises of the castle. However, the so-called experts directed their curiosity only on the issues of who, what and how will revitalize.

An identical agreement on cooperation of the city with OZNKGA was again submitted for further discussion of the City Council, where it was finally approved with modifications, but without significant changes (name of the agreement was added). Official act of signing the agreement with the City Mayor took place in the northern wing of the Neo-gothic castle in Galanta on 29 September 2012.

We had various activities planned in the castle and its vicinity, but, without proper permissions, we were not able to realize them. The decision of the Regional Monuments Board in Trnava was delivered only in October, thus in the time when weather conditions did not allow us to realize some of our activities.

At the beginning of December, archaeologist of the museum started with exploration of wall. Determination of the location of original gate is one of the goals. Another expert will explore composition of the wall itself. After preparing expert opinions, designing of wall completion with the opening for gate will begin. Original gate will be expertly explored with the aim to determine options of restoration or an option of making a replica will be proposed. Of course, all this will be done under strict supervision of experts of the Regional Monuments Board in Trnava. After selecting the type of pavement and approval by the Regional Monuments Board, also temporary pavement on courtyards should be designed. It can be realized only upon approval by the Regional Monuments Board. The owner shall design the entry to the courtyard with regard to observing all safety regulations according to conditions of the premises.

We are moving ahead, last but not least also thanks to the City Mayor. We are not treading water anymore. There are still many things we have to improve and successfully complete.